Life After Loss: A Father’s Open Letter to Families Touched by Autism 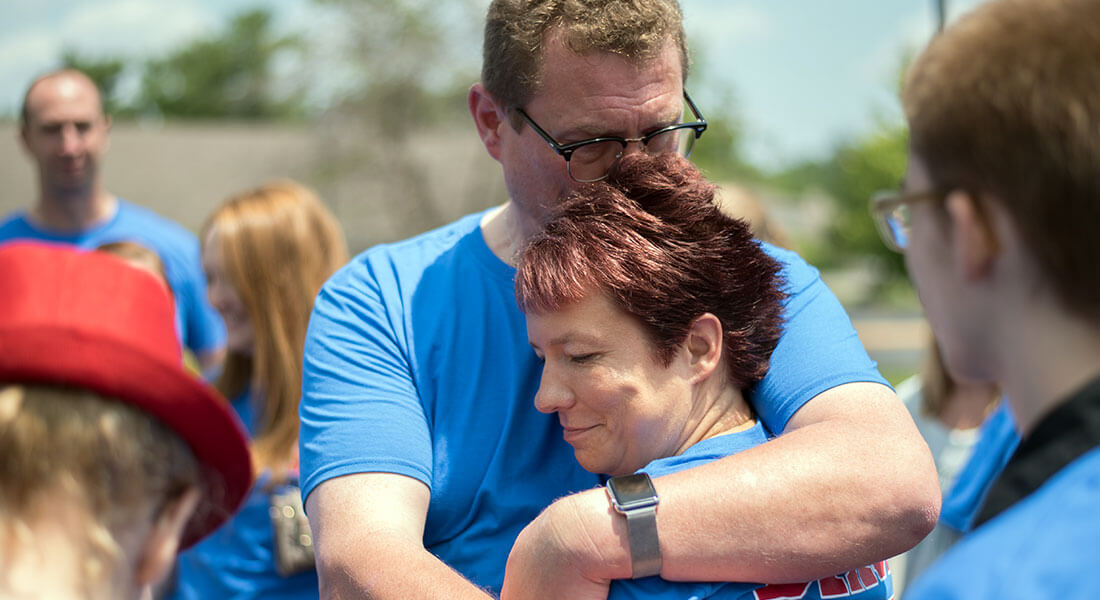 When speaking about our son, Christopher, where do we begin?

He was joy personified.

There was not a single day in which he didn’t make us laugh, shake our heads or just smile.

You know, one of the signs of autism that parents look for is a lack of empathy; Christopher didn’t show that. It took him a while to register that someone felt differently than he did, but once he understood, he locked onto the fact. He mimicked emotions. He did it so well, in fact, that his mother, Sandy, and I had to be very careful about our facial expressions when we were not having the best of days. But, without any outside influences or stimuli, Christopher woke up happy, went through his day happy and went to bed (not when we wanted him to do so, but later) happy. He knew no fear. Our boy could stare the devil in the face and laugh. That part still bothers me quite a bit; I wish he’d known more.

Christopher loved going to church every Sunday. He got to the point where he memorized the liturgy so well that he would call out the priest’s parts too. It’s hard to shush a child when you’re laughing at the same time.

He knew when he was funny. He had the knack of starting something that he’d been told not to do a million times, then look over his shoulder at Sandy or me with a cocked eyebrow and a little smile and we could see the humor dancing in his eyes.

He loved music; all types. He would listen for hours on end to classical melodies, then switch suddenly to jazz, pop or something we’d never heard before. When I’d play the piano, he’d listen for a few minutes, then just have to join in, banging on the keys and jumping up and down. He had his favorites, though. The soundtrack from The Pirate Movie, starring Kristy McNichol, was one; the music from The Polar Express was another. The Wiggles were probably his all-time favorite artists.

Speaking of movies, he was a huge fan. The Star Wars franchise was especially his favorite. We took him to see The Force Awakens when it released in theaters, which was unusual for us; we normally wait to see movies at home. Well, when Kylo Ren began to lose his lightsaber battle to Rey, Christopher started screaming, “Robot! Nooooooo!” All the people around us were very sympathetic to this poor child traumatized by this terrible violence and approved when Sandy took him out of the theater. “What a good mother,” they said. What they didn’t realize is that Christopher was upset that Kylo Ren was losing. They should’ve seen him when Darth Vader died in Return of the Jedi<. Oy. We don’t know why, but he loved the villains.

Those who knew him are already aware that he loved Monsters, Inc. and Monsters U. Sully was his favorite character, and it wasn’t very often that he went to sleep without his own Sully by his side.

Christopher loved to travel, too. Sandy and I took him everywhere we went. If there were places children weren’t “appropriate,” well, then most of the time, we just didn’t go. Christopher got to see Disneyland, Toronto, Nashville, Chattanooga and Mackinac Island, but his favorites were riding the South Shore trains to Chicago, to the Shedd Aquarium and Frankenmuth, Michigan. Christmas happens every day in Frankenmuth – year-round – and that was heaven to him.

What Our Son Taught Us

Narrowing this down is difficult, but the most important thing Christopher taught us was that finding happiness is simply a matter of perspective.

Here was this child, faced with incredible challenges, who went through every day with genuine smiles (most of the time), deep curiosity, and unremitting love. I believe he chose to do that. I believe we all can so choose. For him it seemed easy. I must admit, we find it hard these days. Notes from friends and family to Christopher

When we were first asked whether Christopher had been rated on the autism spectrum, our first reaction was indignation. As more people questioned us, Sandy began reading up on the topic, determined to prove everyone wrong. What she found, of course, was precisely the opposite.

Once Sandy got me past my stubborn grasp on my own dreams for our son and he was diagnosed with autism spectrum disorder, we began to understand just how completely our lives had changed. Christopher had already become the center of our lives and now we were living for him. It seemed like we were always going for tests and analyses, filling out forms, answering questions, meeting with teachers and therapists to try to coordinate benefits to pay for it all. It had become the new normal. Thank God we found incredibly special people along the road who helped.

What does Autism Mean to Us?

Others need to remember that individuals on the spectrum are still people.

They have the same emotions, desires, needs and abilities that everyone else expresses. They simply express them differently. This is not a “disability;” autism is a “re-wiring.” Christopher was capable of the same things as everyone else; he just performed it differently.

I believe that we, as a society, have a long road yet to travel to reach this acceptance.

Our Message to Other Parents

If we had the opportunity to share a message with all parents of children on the spectrum, it would be this:

Don’t allow this “disability” to run your lives. Too often we heard other parents say how they’d given up traveling or going out in the community because “it was just too hard.”

Believe me, we’ve gotten the dirty looks in the supermarket because of a meltdown. We left restaurants because something – often something we couldn’t identify – set off Christopher. We endured head-banging, slapping and the odd looks when a 10-year-old boy needs a diaper change.

We’ve also met the kindness of complete strangers who walked up and said, “I have a family member on the spectrum…can I help?” Or just, “You’re doing fine. Don’t worry.”

Don’t worry what “other people” think. You don’t know them, they don’t know you, and at the end of the day, their opinion is their problem. The joy you’ll feel when you see the joy on your child’s face when they meet Mickey Mouse for the first time makes those insignificant episodes disappear. Or to watch as they stand staring at a huge tank of sharks or Beluga whales, or laugh and shout when three penguins walk past in a row. Don’t hide.

Understand this is not your fault.

It isn’t. No one really knows what causes autism any more than someone can explain why some families have a history of cancer or heart disease, regardless of diet, exercise, personal habits or anything else. You didn’t ask for this; you’re not responsible for the condition.

You are responsible for helping your child manage it. Thanks be to God for people and places like Hopebridge, who help us do that so much better.

Take every possible ounce of happiness and joy that you can from each and every day with your child. Sometimes the routine of doctors and therapists and lab appointments and all the rigmarole seems endless. Believe us, we know. Been there, done that.

Look for the special moments in between and please, don’t be afraid to grab your camera. Take pictures! Shoot videos! You’ll be glad later.

By the same token, remember if you’re no good to yourself, you’re no good to your child. If you have access to respite services, use them. Take a date night once a week. Take a weekend to yourselves. Initially, you’ll feel guilty as sin…we did. In the end, the reunion becomes sweeter and your lives a little better. Don’t be afraid to admit that you might need a break now and then.

Find a Place that Won’t Give Up on Your Child

Christopher came to Hopebridge only a few months before his death. But what months they were!

We learned about Hopebridge through Christopher’s ABA therapist. We were able to schedule an interview and evaluation quickly and were gratified when we were told Hopebridge could help our boy.

Still, we were somewhat suspect. Other therapy providers had told us the same, but a few weeks later, would throw their hands in the air and say, “He’s plateaued. When he’s ready to grow more, we’ll be happy to take him back.”

When we mentioned these prior experiences to the Hopebridge team, the answer was a steady gaze and the calm statement, “We don’t give up.”

And they never did. Through every meltdown, every tantrum and every instance of his innate stubbornness (he was just a boy, after all), Hopebridge South Bend worked through and reached success after success with Christopher after a surprisingly short time.

Immediately before he died, Christopher amazed me by demonstrating practical communication for the first time. He had reached the point of effectively soothing his own emotions and avoiding many meltdowns. He engaged in imaginative play for the first time, using his vivid and active and active mind to entertain himself. He was becoming more fully himself.

While this makes our tragedy even more devastating, Sandy and I are so grateful that Christopher had at least a taste of the Hopebridge motto: “The Best Life Possible.” We can never say, do or feel enough to repay what the men and women of Hopebridge did for our love incarnate. We are eternally grateful.

With so much gratitude,

How Neurodiversity Makes the World Better

How Can I Impact My Child's ABA Therapy? Learn from a Hopebridge BCBA Series