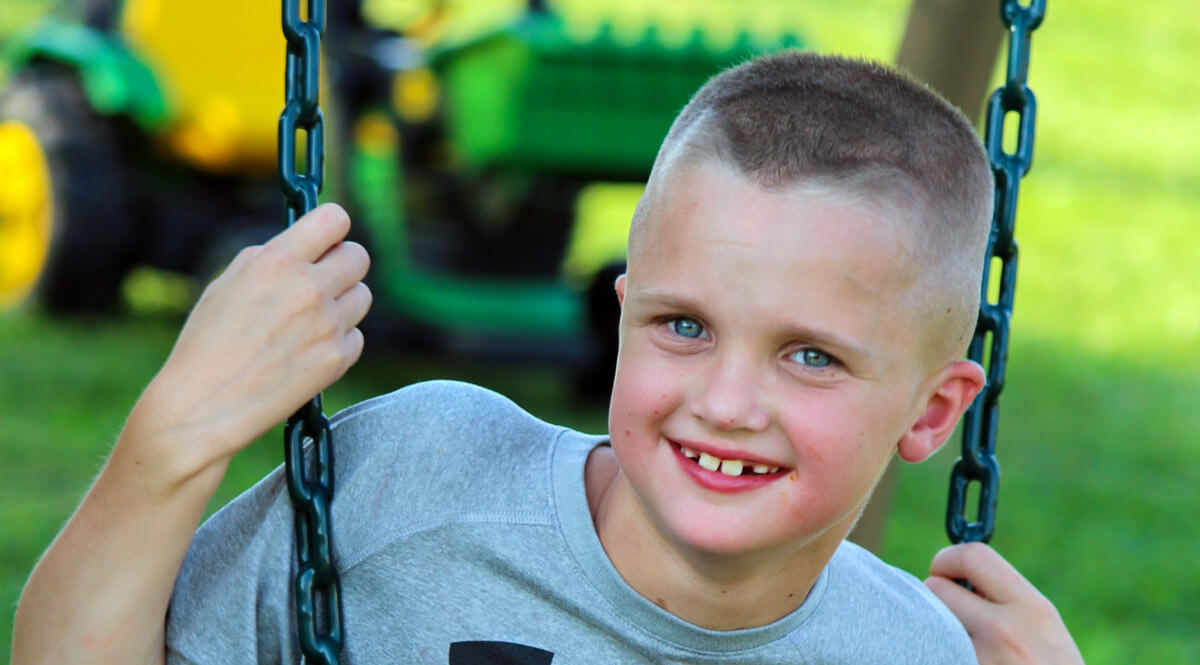 Just because a child cannot talk, it does not mean he does not want friends. And if another does not like to be hugged, it does not mean she cannot love. It’s a common myth that children with autism spectrum disorder (ASD) do not experience emotions.

Those inside the autism community know something many others do not…our children on the spectrum sometimes have even more love and fun to give than the rest of us! Once we help them break their barriers, they open up and share their love in unimaginable and immeasurable ways.

This is something the family of Hopebridge kiddo, Zack, knows first-hand.

“He’s such a lovable child. You’ll fall in love with him in five minutes! He’s just a kid who adores connecting with his brothers, sisters and peers,” said Zack’s father, Bobby. “He still wants to be loved by his schedule, so if he wants to be left alone, he’ll let you know, but much of the time he has such a big heart to share.”

Life for Zack can be a bit of a challenge. At 11 years old, he’s mostly nonverbal and still working hard to communicate. But Zack has what so many others desire – love seems to come naturally for him.

He has a 5-year-old sister, plus his family has grown since then. Starting when his father married Emily, Zack gained a step-brother six months older than him, and a step-sister who is 15 years old. This is not the type of step-sibling story we often hear about in movies; these kids hit it off from day one! While his siblings never had a special needs child in their lives before, they welcomed Zack with open arms. Their parents made it clear up front that he would have good days and bad days, and now they work through any difficulties as a family.

“They had friends over to our house and I asked my stepson if I should talk to them about Zack, since he is nonverbal and loud, which can cause challenges. He told me he already took care of it, which shows the maturity on his end,” said Bobby. “Their acceptance makes living in this household easier and I couldn’t be any happier.”

And it seems as if Zack’s heart grew even bigger in the last few months with a brand new baby brother, Ben! His mom, Brittany, and her boyfriend, Cody, did not know how he would react to an infant. Together, they worked with his therapists at Hopebridge to prepare him for the idea of a baby in the house. They added desensitization to his program to get him more comfortable with items that may be associated with a baby. They role-played and taught him appropriate handling, from how to approach a baby to how to kiss a baby.

Zack already loves his baby brother. He would touch his mother’s stomach and say, “baby,” before he was born, which is huge for someone who is mostly non-verbal. Now whenever he gets home, he takes off to look for little Ben.

Cody has been a huge influence on Zack for the majority of his life. Now Zack is creating another special bond with his new brother, who is helping to teach him new skills and values, like patience.

“Taking on a special needs kid when you don’t have one of your own is a big challenge, but Cody really stepped up to the plate. He is so great with him and Zack really loves him back,” said Bobby. “It’s given me comfort to know Cody has always been there for him, and now to provide a new connection with his son.”

Zack’s family bond is remarkable and their partnerships largely impact his successes, but not everything has come easily for them. At 2 years old, Zack did not babble or talk, and some of his development was not like that of other children his age. His parents took him to the pediatrician, who recommended he receive a diagnostic evaluation, at which time he was diagnosed with ASD.

His mom and dad started him in Kentucky’s early intervention program right away, where he went through several therapists. He then joined an autism-focused preschool with speech therapy for a few years before enrolling in a public school’s autism unit.

It seemed to be going well, but Zack struggled with potty-training, which was especially difficult since he was unable to vocalize his needs. He also only received 30 minutes of speech therapy per month and the school did not employ a behavior therapist. Zack’s parents believe his teachers were great, but their hands were tied with other students and were not able to give him the one-on-one attention he needs. They began to search for other options in Louisville.

Unfortunately, many places on their search would not accept Zack into their programs. It was an issue for some providers that he was not yet toilet-trained others said he was “too low functioning” or “would not fit in with the system.” His parents believed they all liked him, but were not equipped to handle his needs.

They soon discovered the Hopebridge Louisville South autism therapy center and worked to get on the list for applied behavior analysis (ABA). Zack began with Hopebridge in September 2018 and he has already made huge strides!

Toilet-training was an important developmental milestone for Zack and his family, so it was one of the first challenges for his ABA therapy team to approach. They broke it into smaller goals; first aiming to get through every half hour, then 45 minutes, hour-and-a-half, and so on. His BCBA, Brynn Dombroski, shares that he was toilet trained within one week and now independently requests to use the restroom, which was a huge deal.

“He wore Pull-Ups when he started with Hopebridge. Even though Zack is non-verbal, he understood when other kids asked him about it, which was tough.” said Bobby. “It had been nine years since we started training; we just didn’t have the proper techniques to make it stick. Within three months at Hopebridge, he was already fully successful, and we are so grateful for the work from Brynn, John and the rest of his therapy team.”

Communication was another challenge for Zack when he joined Hopebridge. Though he did not speak, he had received an Augmentative and Alternative Communication (AAC) device from his speech therapist. He had not really used it before Hopebridge and tended to throw it when handed to him; possibly fearful of pushing the buttons. Zack’s therapy team worked quickly to get training for the device.

They started with a static screen of only four images – food, drink, ball and bathroom – and trained Zack to select the picture corresponding to his wants and needs. Just months later, he now navigates a more dynamic display; using it to select complete phrases such as, “I want a hug, please,” “I want to go to sleep,” and even, “I want to go to Chick-Fil-A, please.”

“Learning to use this device has significantly helped relieve anxiety and stress for Zack, plus had a big impact on his interaction with peers. He hasn’t mastered it yet, but he’s learning quite a bit and we can’t wait to see more,” said his father.

“Imagine being 11 years old and not being able to communicate like we are right now. Of course you’d be frustrated! Before using the sounding board, he would find creative ways to show us what he wanted; just a boy picking up a big jug of juice to show us when he couldn’t voice it. He’s so much stronger than I’ll ever be.”

Zack is also starting to become more verbal; really trying to speak up. He says around five or six words. According to his dad, sometimes it’s clear, sometimes it’s not, but all in all, it’s improving. He’s also able to imitate movements and put together puzzles, making leaps and bounds since September.

“I give all the credit in the world to Hopebridge. They have done big things for Zack, who is now able to do his own big things every day,” said Bobby.

While we appreciate the credit, Zack has an amazing partnership in his family that has helped him succeed. Thanks to an incredible support team of Brittany and Cody, Bobby and Emily, as well as siblings all working together, Zack is able to receive the care and attention he needs, in addition to ABA therapy.

“I have never looked at Zack as a burden. I’ve never asked, ‘why?’ I think he’s a blessing given to me. I can’t imagine him anywhere else, and he’s changed my life,” said Bobby. “He didn’t choose me to be his parent, I chose to have him, and so I choose to take the best care of him I possibly can.”

Zack’s parents say their son has opened their eyes to life from a different view and what it’s like for someone to live through struggles. Just like every other child – on the spectrum or not – Zack is a person. He wants nothing more than to be accepted and loved the way everyone else does.

“We’ve done everything we can for Zack up until this point. It makes me sad to think not every child has access to the opportunities we try to provide our son,” said Bobby. “But the help is out there; you just have to dig and find it.”

Access to autism services like diagnostic assessments and ABA therapy may be closer than you think. Hopebridge offers center-based therapy across multiple states, with more openings coming soon. View the centers near you and schedule an appointment to discuss giving your child the best life possible.

Get to Know More About Zack:

What is PECS? - Learn from a Hopebridge BCBA Series