Kobe - Taking on New Experiences with Help from ABA Therapy Hopebridge Kiddo Shows us Autism Does not Always Equal Nonverbal

For so many families touched by autism spectrum disorder (ASD), the thrills of a theme park, a day at the zoo, dinner at a restaurant and even a shoe shopping trip seem far too distant. From fears of losing sight of a child to worries of a meltdown, it’s natural to avoid it all together.

That used to be the case for one mom, Nicole, whose fun-loving 6-year-old, Kobe, has been known to run. While his challenges are still real, so is Kobe’s progress only six months into ABA therapy at the Hopebridge Greenwood Center. Joyful experiences outside the home seem to finally be within reach.

The Quest for Autism Resources

Kobe is sweet, sensitive and observant with a bright mind. Nicole describes him as an active – sometimes hyperactive – all-American kid. As her first and only boy, she did not think much of his extra energy at first, but it was called to her attention by a couple of nurses on a day she took her younger daughter for a routine checkup.

“He may not be what would be considered ‘normal,’ but he is extraordinary,” said Nicole. “The autism community is still new to me. I had assumed it was only associated with children who are nonverbal, but my son is not, so the idea didn’t jump out at me at first.” She knew it was important to take seriously and followed the nurses’ recommendations to seek a diagnostic evaluation for autism. During this process, Nicole was told Kobe was on the spectrum, only to later find out she only received an IEP and not a formal diagnosis.

“Kobe had just turned 5 years old and the system wanted me to rush to send him to school. There was no way my son was ready to go to school! And put him on a bus? He could not even sit down to hold a pencil or write his name, much less sit in a classroom all day,” said Nicole.

Like many parents, she worried about what was best for her child and lost a lot of sleep while trying to find the best resources and supports for him. She did not believe school could provide the one-on-one services Kobe needs and continued to advocate for him to learn all the options. She found Hopebridge through some social media digging, sent an email, and received a call back shortly after to begin the intake process.

Hopebridge conducted a formal assessment and provided an official diagnosis of ASD, before enrolling him in applied behavior analysis (ABA therapy) services. It was a weight lifted off Nicole, who had been on a search for answers for a full year prior.

Kobe is an active kid and one of his biggest challenges is staying focused on a task. His mother keeps him busy with all of his favorite things, but it is overwhelming at times, especially because she also has a 2-year-old daughter who occupies a lot of her time, and an 18-year-old at Vincennes University. Previously, she was not able to have conversations with others at home, and even had to replace more than one broken TV while she was on the phone.

To keep him happy and engaged, Nicole brings her son to the park after leaving the center each day, plus plays there for up to four hours on weekends if the weather is right. She purchased bounce houses for the home when it is too cold outside for the park. She works to make his world fun but knows she cannot do everything for him all day long and was ready to find the right services that could help in this area.

“I am so blessed to have found Hopebridge. I don’t mind that it took a little longer to find it because I know I found the right place for Kobe, rather than rush into something that was not a good fit,” said Nicole. “I do not worry about my baby when he’s there. I know he’s safe and likes going to Hopebridge to play with friends; it gives him a break too.”

Since beginning ABA therapy, Kobe is able to play more independently as well as work in a classroom setting. He is now able to sit and enjoy working on a project or puzzle on his own for three to five minutes, which is a great accomplishment for him. He now plays video games too, which not only strengthens his hand-eye coordination but also gives him an outlet he enjoys for up to 10 minutes. When he wants more help, he is able to voice his needs appropriately and ask for assistance, which is another achievement.

Kobe’s patience has grown alongside his attention and his mom has begun noticing it throughout all of his interactions, from eating to putting things in the trash. Just recently, he asked if he could have a bowl of Fruit Loops for breakfast while Nicole got his sister ready in the morning. He patiently waited for his breakfast for a whole 20 minutes, which is a big step for him. 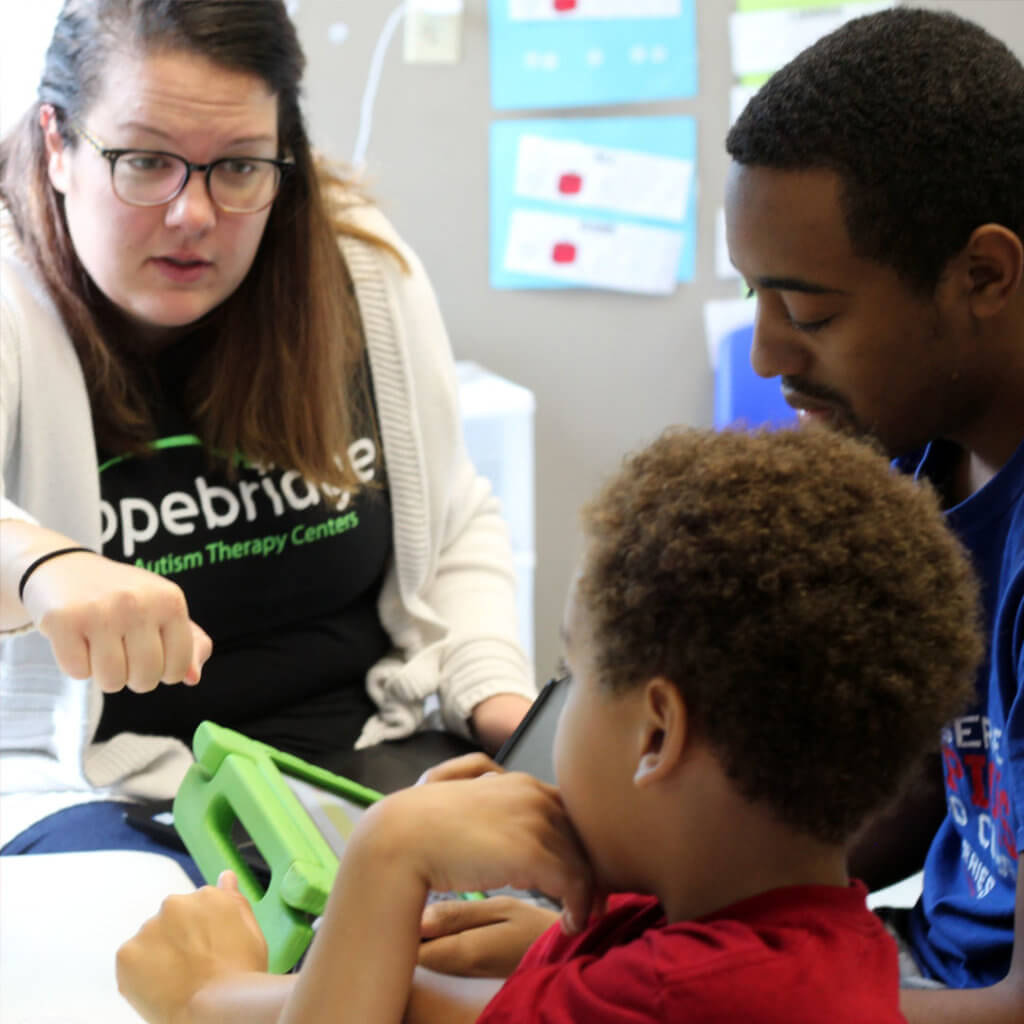 Since beginning ABA therapy, Kobe is able to play more independently as well as work in a classroom setting.

“It is incredible that this is all happening in such a short period of time. In just two weeks, Kobe was already making strides, and now after six months, his growth is amazing,” said Nicole. “It gives me a mental break now and then, but even better, I get to experience more of his personality since he is able to sit and focus rather than always running around.”

Elopement and aggression are other challenging behaviors Kobe and his Hopebridge team continue to proactively work on through therapy. For instance, a previous trip to the zoo was a bit nerve-wracking, as he lacks the fear most have to keep them from climbing into animal pens. Visiting restaurants and shops is difficult because he likes to run around. Nicole has had to leave an entire cart full of groceries in the store because of a tantrum complete with biting, kicking and hitting.

A monkey backpack with a tether helps, which he has used attending the fair each year since age 2. She knows many people do not understand it and may judge its use, but the backpack has been an important safety tool for them because Kobe was known to wander and is quite quick. He thinks of it as his best friend and knows it is there to keep him safe. He can take it on and off by himself, but they still use it just in case.

“I’ve gotten so many looks, glares and snares. I don’t personally care about the looks or comments I receive from others on the outside, but I have to be aware of him and how he feels when that happens,” said Nicole. “Kobe understands everything – and if he doesn’t, he will question me about it – so it can hurt when others stare or comment.”

These challenges have led Nicole to opt-out of most outings until recently, though it is still a struggle. Involving others helps keep extra eyes on him, which is especially important since Kobe has siblings his mother also needs to watch, but he sometimes becomes antsy around others, so more people do not always lead to a better experience.

With help from ABA – and Kobe’s loving grandparents – he was, fortunately, able to take a dream trip to Kings Island this summer. It took some convincing, but Nicole’s parents took him on a two-day trip to the amusement park and he had a blast. Kids with autism often have difficulty with crowds. With ABA Therapy, amusement park trips can become an option.

“Outside of having my baby girl, I had never been away from Kobe,” said Nicole. “I was so scared, but thought it would be good for him.”

She was nervous about how he would deal with standing in lines and afraid he might walk out the hotel door when he woke in a strange new area. Thankfully, the lines were not too long and he stayed with our family without trying to run away. There were no issues and they had a great time! Kobe, who Nicole calls a daredevil, went on all the rides with his grandfather. He did so well that his grandparents already asked to take him back for a second trip this month.

“I’m trying to open the barriers after this summer and provide him with more public experiences so he can learn, but it can get rough,” said Nicole. “It’s not necessarily difficult dealing with my kids themselves, but sometimes I can’t handle dealing with others who don’t accept them. We’re taking it step by step.”

Kobe is great about picking up a skill and sticking with it. He masters goals daily and the team constantly adds new tasks for him to work toward. Nicole believes he has a strong mind and is not worried about his academics, though she is happy he is able to prepare for the classroom by building other necessary school-ready skills at Hopebridge.

“There is no one else like him. I don’t think about a disability or what he can’t do. He’s special, but I think all kids are special. Kids with autism are special kids, but not special needs kids,” said Nicole. Kobe and Nicole with his Greenwood team!

He does not interact with a lot of people, but he is trying and once he warms up, he gets attached. When he started at Hopebridge, Kobe became very close to his therapist. His mom said he even tells him he loves him and gives him hugs. He knows everyone in the Greenwood center, talks to all the therapists and knows which parents pick up which kids in the afternoons. He brightens their days.

“The process leading up to this had been stressful and overwhelming, but I have gotten better sleep and peace of mind since Kobe has been here with Hopebridge. It’s been such a big relief,” said Nicole. “As tired as I am sometimes…that smile. That face. When he tells me he loves me, it’s so beautiful that everything else just falls away. Plus, he gives the best hugs. It makes it all worth it.”

Nicole advocated for her son and got him the help he needed to live a fuller life. Do you think your child may be showing signs of autism? Hopebridge offers diagnostic assessments as well as center-based therapy across multiple states. Check out the centers near you and give us a call to get the answers your family needs.

Get to Know More About Kobe:

How do I Choose a Qualified ABA Therapy Provider?