Super Parents on the Autism Journey

At Hopebridge, you probably see and hear us talk about our kiddos a lot because let’s face it, they are pretty awesome. What you may not notice, however, is behind all these cool kids in our centers are some incredible families who show us the deep love and devotion behind raising children with autism.

While we are unable to spotlight every amazing mom, dad, grandma, step-dad or older sibling we have met at Hopebridge, we learned about a few super parents we couldn’t hold back on introducing to you.

Mom on A Mission

Young Corbin was diagnosed with autism spectrum disorder (ASD) a little after his 2nd birthday, following some concerns over slower-developing and regressed speech. Shortly after his diagnosis, his family moved to the Cincinnati, Ohio area, where his father was to lead a new church. His mother, Brianne, dove into research to find the best treatment options for her son in their new home when she found the Hopebridge Mason center. Brianne was drawn to Hopebridge because of the care they showed her son and her family from the beginning.

A licensed marriage and family therapist, Brianne now stays home to care for her three sons. She felt her expertise was not enough for Corbin, who needed full-time ABA therapy in addition to a full-time mom. She was drawn to Hopebridge because of the care they showed her son and her family from the beginning, but their therapy team knows she is a key driver in his progress as well.

“Brianne is 150 percent involved in Corbin’s care. In more than a year since he has been with us at Hopebridge, she attends parent training every week; keeping us updated with successes at home and in the community,” said Hopebridge Mason Clinic Manager Ashley Hall.

Her involvement with his therapy team has paid off. Brianne described Corbin as a “little pinball who would run back and forth” when he first began at Hopebridge, but has since worked his way from learning to sit for 30 seconds at a time, currently able to sit for up to 10 minutes. He used to run around the house with his food but now eats at the table and cleans what he drops. He is potty trained and was able to use the restroom in a public place when attending the Festival of Lights at the Cincinnati Zoo. Since starting at the center, Corbin learned to sign and uses PECS to communicate. “The only way I’m a super mom is because I have an awesome team of people at Hopebridge I get to work with!”- Brianne, Hoperidge Mom

On top of weekly parent training sessions, she makes time to volunteer at her older sons’ schools, as well as help her husband at the church. But that’s not where her efforts stop.

“Brianne has done a ton of research into autism and goes above and beyond to serve as a strong advocate for her kids. Her involvement in educating her community to raise awareness for ASD is admirable.” Ashley told us.

Corbin is a runner. He has come a long way in therapy, but still has challenges with wandering, so Brianne remains active to keep her son safe. In addition to using special locks on the doors to their home, Brianne set out door to door with bags of Panera Bread’s autism awareness puzzle piece cookies to introduce Corbin to her new neighbors.

The cookies – which included her name, his name, their address and phone number on the bag – were a gift to all her neighbors along the street. She explained to them that her sweet son has autism, does not talk and sometimes takes off running without stopping; also requesting that they contact her should they see him along the road. In addition to educating the neighborhood, Brianne has also been vocal about Corbin and autism in general within their church.

Unfortunately but fortunately, Brianne’s actions came in handy. One day, a visitor forgot to use the top lock. Corbin made it out of the house and ran down the road alone. A neighbor spotted him and was able to identify the situation before it became a major issue. In turn, this prompted more neighbors to ask questions about Corbin and his needs, so Brianne’s initial act sparked a lot of new conversation about autism. 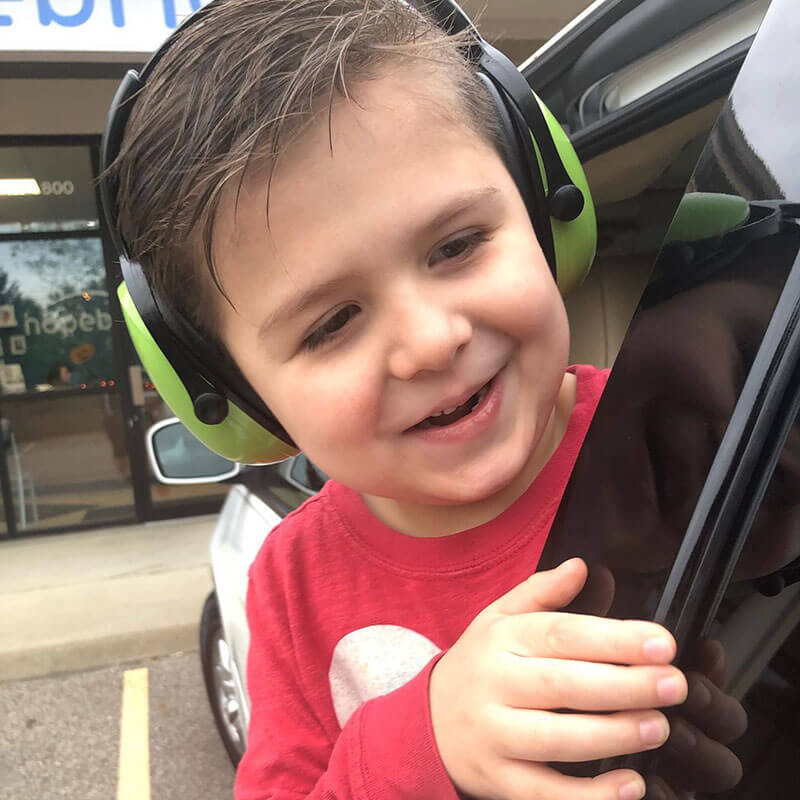 Brianne’s initiative has sparked a lot of new conversations about Crobin and autism in her community.

“It can be scary to tell people about your child’s disability or disorder and the hardships that come with it, but all our neighbors were happy to hear from us and open to learning they could help,” said Brianne. “Plus, everyone likes cookies!”

We at Hopebridge are grateful for the work Brianne does for her son and the autism community in general. Thank you for all that you do, Super Mom!

Making Friends on the Autism Journey

For those with autism, making friends is not always easy. This can also be the case for another group affected by ASD…the parents of kiddos on the spectrum. It can be more difficult to have play dates with typically developing kids or to find time to balance relationships overall.

Thankfully, autism centers like Hopebridge can provide refuge to parents in more ways than one. Beyond receiving therapy, some of our super parents are finding comfort in getting to know each other and watching their children grow together in our centers.

For two families of 3-year-old boys, it all started in the lobby of the Hopebridge Carmel center in Indiana.

“I didn’t know anyone else who had a child with autism that was Flint’s age. I felt alone and isolated. Flint had trouble interacting with other kiddos because of his communication delay,” said Abby, mother to Hopebridge kiddo, Flint. “Now we’ve been able to meet and talk with other people who are experiencing the same thing.” There is a lot of negative stuff about ABA out there, but hearing what was happening firsthand from a family in the Hopebridge lobby made me feel like this was the place my child needs to be.”

“When we started, another family told us on the first day how much they noticed a difference in their child. There is a lot of negative stuff about ABA out there, but hearing what was happening firsthand from a family in the Hopebridge lobby made me feel like this was the place my child needs to be,” Abby told us.

Together these families have bonded over their children, discussing the challenges as well as celebrating the wins together. From potty training to helping their sons socialize with others, they have connected over the love for their kids as well as their own lives.

“When my son started clapping his hands, it was a huge milestone for us! I love that I get to share that with the other parents and they completely understand the significance and celebrate with me,” said Jessica, mom to Hopebridge kiddo, Michael. “A few weeks ago, we were in the Hopebridge lobby together with some other parents. At one moment my son said, ‘Chase!’ to suggest he wanted someone to chase him, and everyone was so shocked and surprised. There were instant smiles everywhere. The other parents understood exactly what he was trying to say and were just as thrilled as I was to hear him use his voice.” These two families remember their first outing together. Both a little nervous about whether the play date would go well for their sons, they were pleasantly surprised at how the boys enjoyed playing together all afternoon. Abby and Jessica each noted how her son’s face “lit up” at the sight of his friend outside of the center.

Self-care and getting to know other parents impacted by autism is important because they are going through experiences not everyone will understand. It was Hopebridge that brought these two families together, but it is because of their involvement in their children’s therapy and overall wellbeing that we believe they are “super parents.”

“These two boys are wonderful and so are their families; always working for their kids through parent training and at home,” said Hopebridge Carmel BCBA Amy Miller. “Their friendship is really special and was a side benefit of Hopebridge. Relationships like this don’t always come with the territory, but this shows if you make the most of your time here, you might make a connection with others who are great for you and your child.”

Thank you, Abby and Jessica for all that you do for your children and each other!

Do these stories inspire you? Contact us so we can help you amp up your super parent powers even more by getting your child the help he or she needs in communication, socialization and the management of other behaviors and skills. From diagnostic evaluations to ABA therapy and more, we’ll give you the tools to show your child not all heroes wear capes.

An Open Letter to Parents from Your Speech Pathologist

What Impact Does Autism Have on Siblings?